Starting Up? Beware the Hype. 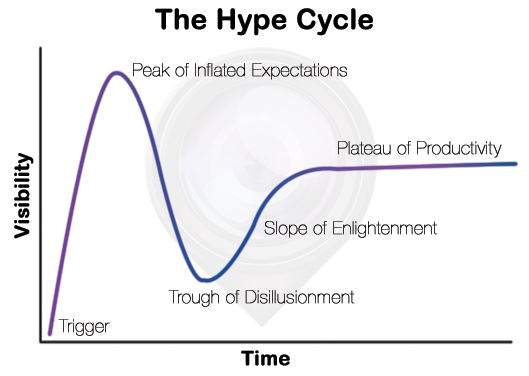 As we’ve watched our announcement make it’s way around, we’ve appreciated the sudden spikes in our social followers and likes, the new blog subscriptions, and our first flows of web traffic and new account creations. It’s obviously been great to see, but with it all, we’ve kept one important concept in mind: The Hype Cycle.

The Hype Cycle is the pattern of public interest that new things go through after launch. That thing could be, well, anything: a new technology, a new band, a new restaurant, or perhaps in our case, a new product.

The Cycle is made up of 5 parts: the “Trigger”, the “Peak of Inflated Expectations”, the “Trough of Disillusionment”, the “Slope of Enlightenment”, and the “Plateau of Productivity”:

1. The Trigger is the start, sparked by something like a new product launch, an announcement, or a new breakthrough.

2. The Peak of Inflated Expectations = the huge spike in interest that follows the trigger. People talk about it. People hype it. Speculation and excitement fuel the hype.

3. The Trough of Disillusionment – the interest surrounding a new product launch quickly drops off. Related: the “short attention span” of the media and the masses. Like when a crazy news story whips the country into a frenzy, and then the next week, everybody forgets.

4. The Slope of Enlightenment – the company learns the ropes, and starts to get the hang of things. Customers are loyal and satisfied. Word spreads.

5. The Plateau of Productivity – the “thing” stabilizes, matures, and becomes widely accepted. #winning.

So the takeaway for anyone launching their thing: mind the cycle. Don’t get too caught up in the hype. In the days and weeks that follow your launch, interest might drop off. Just stay focused, keep hustling, and listen to your customers.

Your time will come.

(Dig it? Sign up to get future posts by email.)