Street Team 101: Part 2 – How to Prepare your Street Team 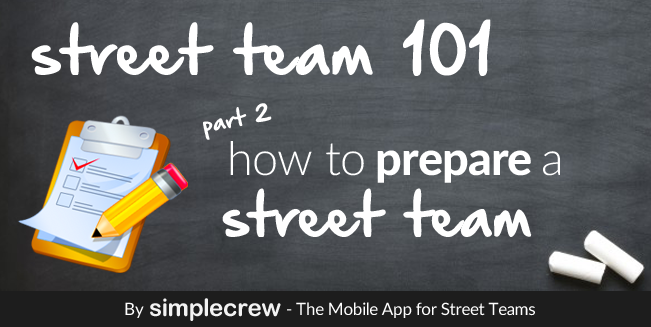 This is the second post in our “Street Team 101” series

Have you seen the documentary film Sustainable?

It’s a documentary film about a world-renowned farmer who created a fully self-sustaining, organic farming plant. In the film, he states, again and again, the importance of creating the best environment for things to grow.

Your team members will do amazing work if they see that the team is being managed and supported with care and love. But they’ll flounder and fall apathetic if the team is managed as an afterthought.

Bottom line – you want your new recruits to get the feeling right off the bat that the team they’re joining is fun but organized and productive.

The best way to make this impression on them from the start is by putting in a little bit of effort up front to get the team prepared and onboarded smoothly.

Give New Recruits A ‘Welcome Packet’

When you’re running a street team, the reality is you’re going to be constantly recruiting (and churning) street team members.

Of course, you’ll have the die-hards that’ll stick with you for years and will make up the core of your team. But there will always be new people interested in getting involved with your company and you should be open to giving them that opportunity.

When these new people join, there’re a few things that you’ll want them to know about the team, how it works, and what’s expected of them. So you make them a “Welcome Packet.”

Your “Packet” can even be a few pages outlining the need-to-know info in a PDF or Word Document. And the best part – it’s the gift that keeps on giving. After you make it once, it can remain relevant (with minor changes as necessary) for years.

Welcome Packet content can vary from team to team, but generally includes the following:

You can expand or remove any of those ideas. But they give a good template for the kinds of things that make it easier for a new team member to take part and get excited. Especially if this is a volunteer team, your team members will be more enthusiastic if it’s clear that the team their signing up for is organized. Most people thrive in more structured environments and will be relieved to see that they’re investing their time in a team that cares.

Again, you don’t need to write a novel on each topic. Brevity can be strong, and outline format can be fine. Just have something to send them or hand them when they’re first signing up, and it’ll go a long, long way.

The whole essence of street teams–what separates them in a world of growing online and digital promotions–is their personal element.

These teams engage with other people, transfer enthusiasm, and build community. And they do it all in person.

It’s the human element that makes street teams special. So bring your team together in real life to help foster that.

An initial meeting can be as simple as a couple pizzas in a living room, some time to mingle, and simply going through the Welcome Packet. You’ll give people a chance to ask questions and to connect with other team members.

Meeting the other team members is imperative. Because in doing so, individuals on your team will become more engaged. They’ll see that they’re part of something bigger, and just like when you work out with a partner, they’ll go the extra mile as a member of a team.

A Little Energy Up Front Goes A Long Way

A street team managed correctly will be a powerful driver in your marketing and brand. Promoting your business in the local community can beat digital marketing in ways we’ll never get rid of.

Remember, your team wants to get involved. They want to be associated with the magic, and that’s always a very powerful connection. So help them help you.

It’s all uphill from there.

Next: Part 3 – How to Incentivize and Motivate your Street Team