Street Team 101: Part 5 – How to Communicate with your Street Team 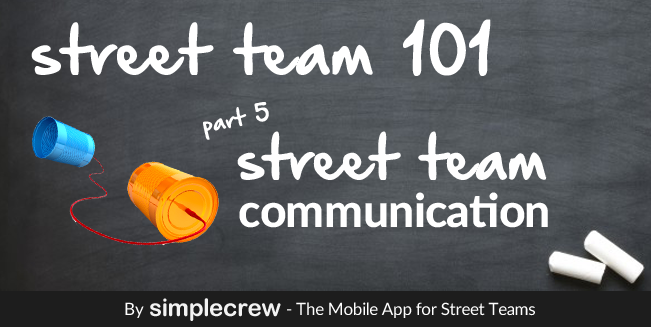 Welcome back to the next entry in our Street Team 101 series!

In this post, I’ll lay out the best practices for communicating with your street team, so everyone stays on the same page and works together like a well oiled machine.

First, a word on why you should be communicating with your team and what’s the importance. Basically, as common sense would betray, it’s important that you maintain clear lines of communication to and from your street team.

Good communication will ensure that your team clearly understands their goals and responsibilities at any given time, and that they can get in touch with you or someone else on the team for help when they need it.

Additionally, good communication should foster a sense of community (something we’ll touch on later in the post), which will in turn make the street team more fun to be a part of, which in turn will make the whole thing more effective for you!

So, let’s get to it. In this post we’ll break down a couple key channels of general communication you should use, then we’ll touch on the importance of accountability and reporting, and last we’ll circle back to the concept of meetings – not a necessity for all street teams, but certainly a bonus for extra credit.

The three tools that I’ve seen most successful street teams using are private Facebook groups, email, and phone/text. Each of these tools serve different purposes for different times, and together, they will work to help you and your street team do your thing.

Remember back in the first part of the series, How To Recruit A Street Team, we put together a Google form for your street team members to fill out, including email address, phone numbers, etc…

The Google form will put your entire team’s contact info into a spreadsheet for you, so you have all this information handy. Now, let’s look at how each of these tools might be used.

Private Facebook Groups are great because of their convenience. A lot of people check Facebook quite often, and by default they will receive notifications when there are posts and updates to the group.

Because of the notifications and the convenience, Facebook Groups are a great place to post quick updates and smaller things that you want the group to know. Things like new tasks, giving props to any individual for good work, or other random updates for your team are all fair game for a private Facebook group.

However, because of the social, constantly updating nature of Facebook, it’s not necessarily the ideal place for bigger, more important messages and updates. For that you have Email.

Email
Slightly “heavier” than Facebook, email is the best way to send the more important messages to your team. Things like new project launches, project recaps, and more important updates are all better done through email.

A great idea we’ve seen teams do is send a bi-weekly or monthly Street Team Update to their entire team. These recaps can basically serve as a regular newsletter to your team, and can include things like all the important announcements from the last few weeks, all the initiatives for the next few weeks, upcoming events, and even fun stuff such as “most valuable player” shout outs and other rewards.

Phone/Text
Finally, the last obvious piece of the puzzle is phone and text. This channel is highly personal and real-time, making it most ideal for important details *during* a campaign or mission.

Things like confirming guest lists, coordinating marketing materials, and checking in on your team during their work hours are all best suited for calls and texts.

With a Facebook Group, emails, and phone/text, you’ve got a solid foundation for general communication with your team. Next, let’s look at how you’ll manage accountability and reporting with you team.

Accountability and reporting will play a critical role in making sure your team is running smoothly. We like to compare reporting to working out at the gym with a partner – when you know you’re not alone, you end up pushing yourself harder and doing your best work.

Reporting helps in a couple ways. First, as mentioned, it will help your team hold themselves more accountable for their work. Second, if you’re responsible for reporting your team’s work to a boss or client, it’s important to have documentation to show them.

Finally, ideally your team will have access to the rest of the teams reports, so they can see what everyone else is doing. This transparency will give them the bigger picture of what your team is doing, so they can work together more effectively and get that special feeling they get when they see they’re part of something bigger than just themselves.

Reports typically come in three forms: written, photos, and video. For reasons I’ll explain here, I think photos are the best way to go, but let’s take a look at all three.

Written reports
The first and arguably least effective of the three methods of reporting are written reports. In a written report, you can ask your team members for brief paragraph descriptions of their work including things like date/time, event, number of flyers & posters distributed, crowd reactions/interactions, and general reflections.

Because these reports aren’t necessarily easy to go over at a glance, they don’t scale as well – meaning once you start getting more than 7 or 8 in a day, it becomes hard to digest all the info. Also, they’re more of a pain and more friction for each team member to write and send to you.

The best use of written reports I’ve seen is when managers have split their team up into smaller groups, each with a team leader. They then have put the team leaders in charge of submitting a weekly written recap of their sub-groups activity for the week, along with photos of the work that’s been done.

So, yeah… photos are key. Let’s talk about that.

Photos (SimpleCrew)
This is where our internal photo sharing app, SimpleCrew shines as the perfect solution for your street team accountability needs. We focus on photos, so let’s talk about why photos are necessary for you, and how you should use them.

As I’ve experienced, photos have been the best way for street teams to repot their work and maintain accountability. Photos are easy to take, and easy to digest (and with the right tools *cough*simplecrew*cough*, easy to send & collect).

What you should be asking your team to do is simple – take photos of the work they’re doing in the field, and send them to you.

Enter SimpleCrew. The idea for SimpleCrew actually came from having a ton of street team photos emailed to me – it was a ridiculous pain in the ass. You can imagine – a messy inbox filled with photo attachments of all different file types, and none of the individual team members being able to see what the other folks were doing.

SimpleCrew solves that problem – team members take photos of their work using the mobile app for iPhone or Android, and then everyone can log-in online to see organized timelines of all the photos that have been submitted.

Every photo includes who took each photo, the date and the time, and then we use the GPS location from the smartphones to pin every photo on a map.

We offer 14 day free trials of SimpleCrew. Start yours here.

YouTube videos
Back when I was just cutting my teeth in street teaming for the Disco Biscuits, I stopped taking photos during flying missions and just kept a camera rolling. After a few minutes, I’d have a video to upload to YouTube and would send that to my manager Erik over at FanManager.net.

Pretty self explanatory. They’re great, but probably not the easiest thing to glance-over if you’ve got more than a handful of people sending them to you.

Clients will love them though, so keep this option in mind if you’re being contracted to do work on behalf of a client.

Finally, we can return to the idea of the meeting. Back in “Part 2: How To Prepare A Street Team” we went over how to run an orientation meeting so your team would get started on a good foot. Well, turns out that regular meetings are a great thing to keep doing over time, if everyone’s local. (Obviously if you’re managing a team outside one regional or locale, this becomes less feasible).

So, given that you’re a local or regional team, meetings are great for a couple reasons: they help reduce team member turnover, they keep your team motivated, and they help your team build a greater sense of community.

With regular meetings, you can help reduce turnover by keeping the team more engaged. Meetings will give your team face time, so you can become familiar with everyone and they can all become familiar with each other. With this, team members will be more motivated to stay on board and not leave the team.

Another tip to reduce turnover is just to make sure that there’s consistent things for everyone on the team to be doing. That doesn’t mean just make up shit for them to do. More, that means not over-hiring and building a team of people that you don’t need in the first place. If you don’t have that much work going around, it makes sense to keep a smaller, reliable, consistent team.

Motivate & Reward
The second thing you can do through meetings is keep your team more motivated. Linked in with reducing turnover, meetings will give your team members a sense of reward. They’ll feel a part of something bigger, and will have a chance to meet their manager and peers which is a huge benefit for internal motivation.

You can also use meetings to give recognition to team members that have been killing it for you, either on a monthly or possibly annual basis.