Over the last few weeks, I implemented a redesign of our marketing and sales page here at SimpleCrew.com.

This is the 5th design we’ve implemented for the site since first launching it in February 2012, and with it has come the most significant structural change to the website so far. Namely, I built this version of the website using a website builder tool for WordPress called OptimizePress, but more on that later.

Here’s a look into some of the past designs of the SimpleCrew website, and some insights behind the inspiration, design, and development for each.

The first design we implemented in February 2012 was a simple one-page email capture: 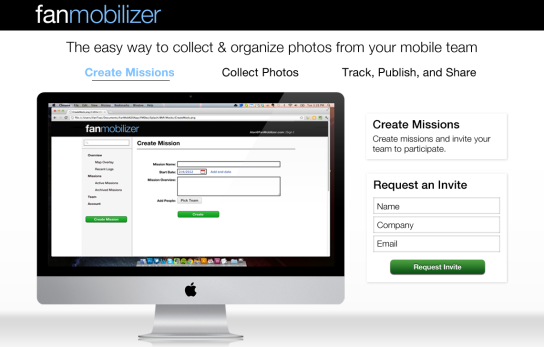 This was our site before we had a product available for testing, when the app was just an idea. In fact, as you can see, back in 2012 the original name for the app was “FanMobilizer” – an homage to a marketing agency for artists and bands that I’d worked with before (FanManager)

From our friend Dan Schwartz, a real estate wholesaler, we learned early on that the app was going to be useful for industries outside of entertainment, so we changed the name to SimpleCrew to reflect the broader potential.

The original website design was inspired by the GroupMe website. Both featured a one-page scroller, a rich, descriptive product graphic, and sign-up inputs on alternating sides: 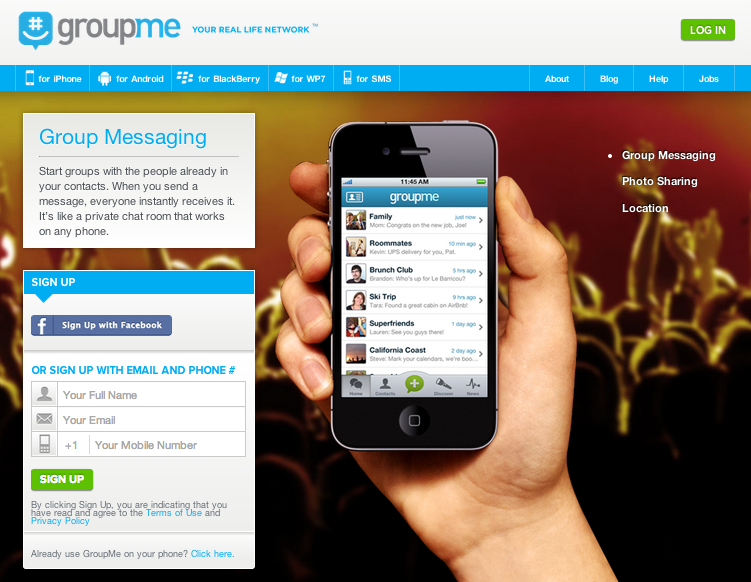 Starting out in 2012, I’d played with HTML a little bit, but I had no experience with CSS or WordPress. I designed a mock-up of the site in Photoshop, and then sent it to Mike to hack together in WordPress.

We recognized that Mike’s time was better spent building the actual app as opposed to the marketing site, so I started to play around with WordPress, and by the time the first version of the SimpleCrew app went live in October 2012, I was able to implement a new design on WordPress: 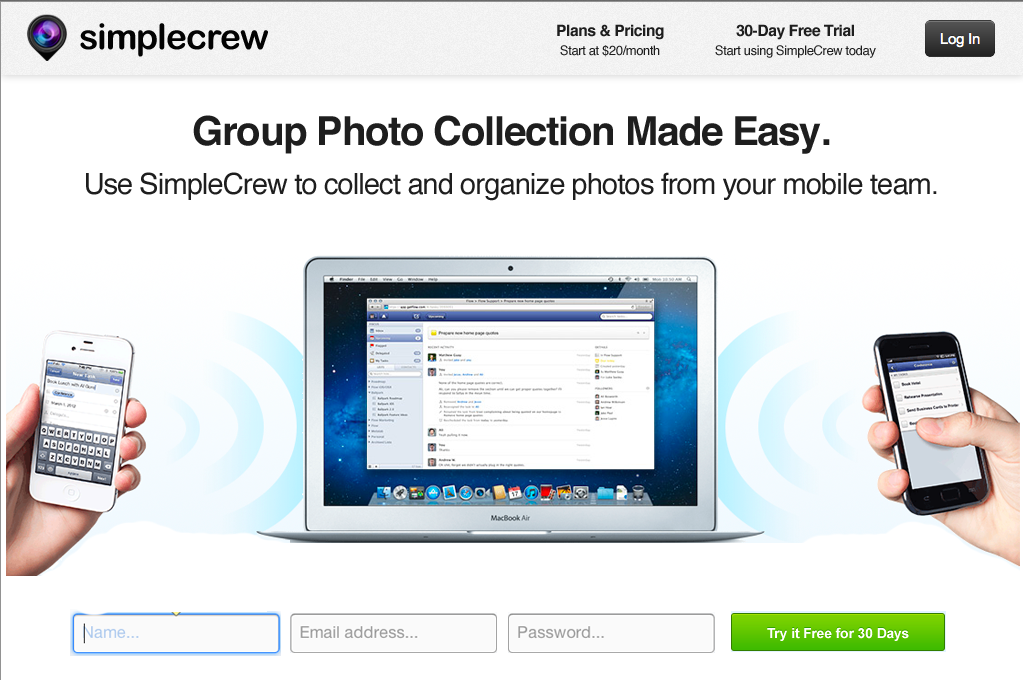 This design featured a fixed header, with pricing, sign-up, and log-in fixed along the top, a descriptive graphic in the middle, and input fields horizontally along the bottom.

A few months later, I slightly modified this version: 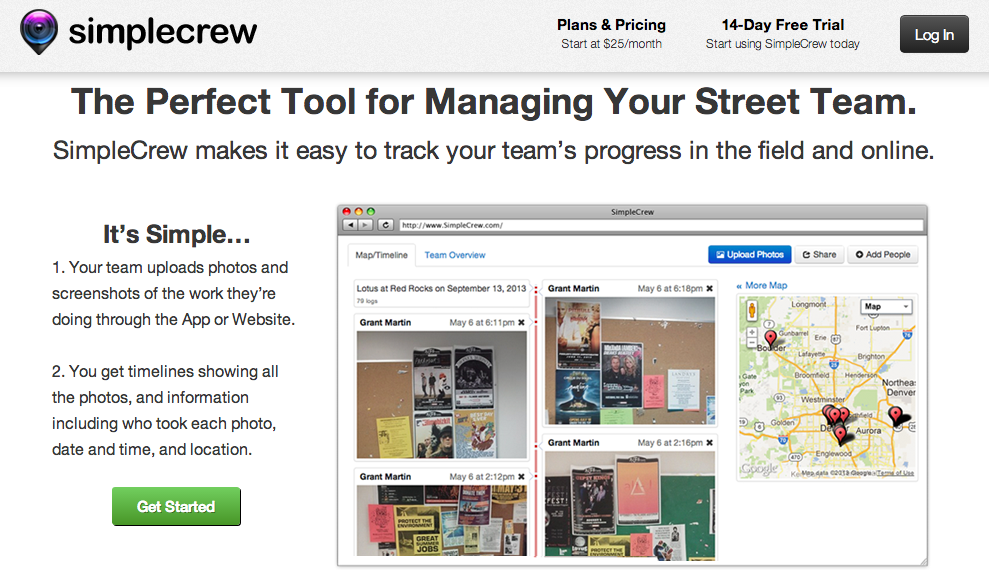 At this time, I was still designing in Photoshop, and painstakingly hacking a theme together and placing images using custom CSS and HTML in WordPress.

It took a couple days to put together a single page. And once I had pages together, I really wouldn’t want to touch them for fear of breaking the custom CSS I was hacking together for each page.

It was a really slow process to make any changes or to ship new landing pages, so I started experimenting with Twitter Bootstrap and in March this year, I implemented this design using Bootstrap on top of WordPress: 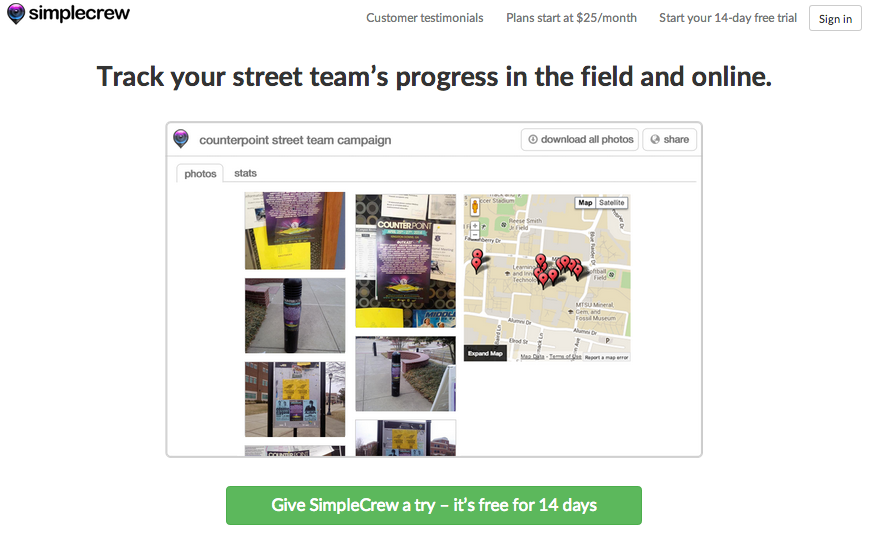 Bootstrap looked great and was faster to use than customer coded HTML and CSS, but ultimately it was still using HTML inside WordPress which is messy, and it still took a couple hours to ship new pages.

Then in May this year, my friend Anton showed me OptimizePress – a website page builder for WordPress.

With OptimizePress, I’m able to build a ship pages in a drag-and-drop editor in minutes. It saves a lot of the deploying time, and is extremely thorough and flexible so I can pretty much get everything I need from it. 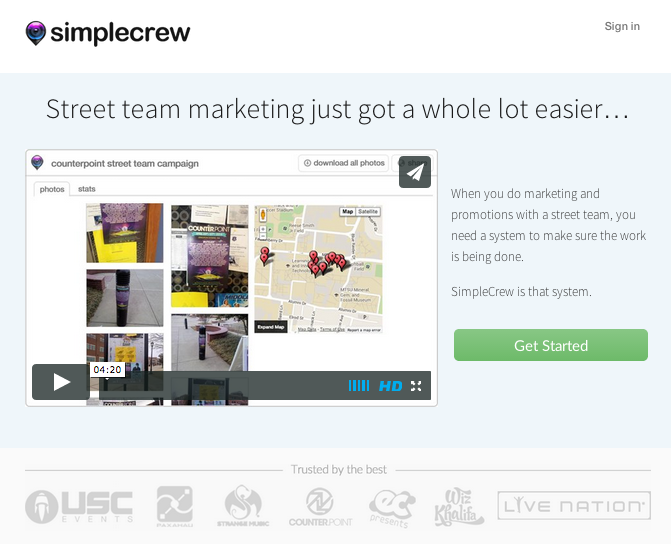 Now, I’m using a Vimeo Pro widget to put a tour video on the front page. I also have a new “customers”  section under the home page for social proof, and created a new Testimonials page where I share some testimonials from out customers.

I’m really happy with the current version of the site, and especially with OptimizePress. With the new setup, I don’t have to mess with HTML or CSS beyond a couple tweaks if I want anything customized beyond the (quite flexible) customization options already build into OP. And I can ship new pages in a matter of minutes instead of hours or days.

Click around the site and the blog here, and let me know what you think. And if you have any questions about OptimizePress for your website, let me know. I’m happy to help!

First – a word on Mobile. Over the last few weeks, several people have experienced photo uploading issues from iPhone. The latest update of iOS (iOS7.1) has caused crashing and upload issues with our current SimpleCrew app.

Over the last 6 weeks, we’ve been working closely with our friends Nico and Cristian from moblox.io to design and develop fully revamped and redesigned mobile apps for both iPhone and Android.

Along with an updated design and several key feature updates (including the ability to create new campaigns and add/remove people from campaigns in the mobile app – shoutout to our friends at DAWGSinc: we’re comin’ for ya!), the new mobile apps will address the crashing issues some of you have been experiencing.

The iOS app was submitted for iTunes review last week and should be available shortly. Android app soon to follow.

On to the other app updates… a big list for ya! Check it out:

Previously, the “Stats” page in campaigns included everyone on your team, regardless of whether or not they were assigned to that campaign. In this update, only team member associated with each campaign will show up in the Stats page for that campaign.

That, and Admins and Owners are labeled since they have access to every campaign.

Users can now change their passwords by going to their “My Account” page, from the link in the top right hand corner (when logged in on the web).

Admins and Owners can now download all photos of active campaigns from the “Export All Photos” button on the dashboard!

We launched a support page, which is accessible at www.SimpleCrew.com/support. We will be expanding this into a full knowledge-base of the app, including video and written tutorials that will help our customers get the most from the app.

You can now download the mobile app by going to app.simplecrew.com/getapp from your phone or online. We also included a link to this from our website.

When you go to the link from your computer, you have the option to enter your phone number, and we’ll send you a text with the download link.

Users can now add a phone number as part of their contact info on member accounts. We plan on rolling out more management features including individual user profiles soon, and having access to phone numbers will be a part of that.

This week we released an update to the SimpleCrew campaigns. Here’s what’s new:

We updated the look of the timeline with new photo cards, new style, and a cleaner overall design. You can now hold your mouse over any photo on the left side, and the corresponding map pin with be highlighted. 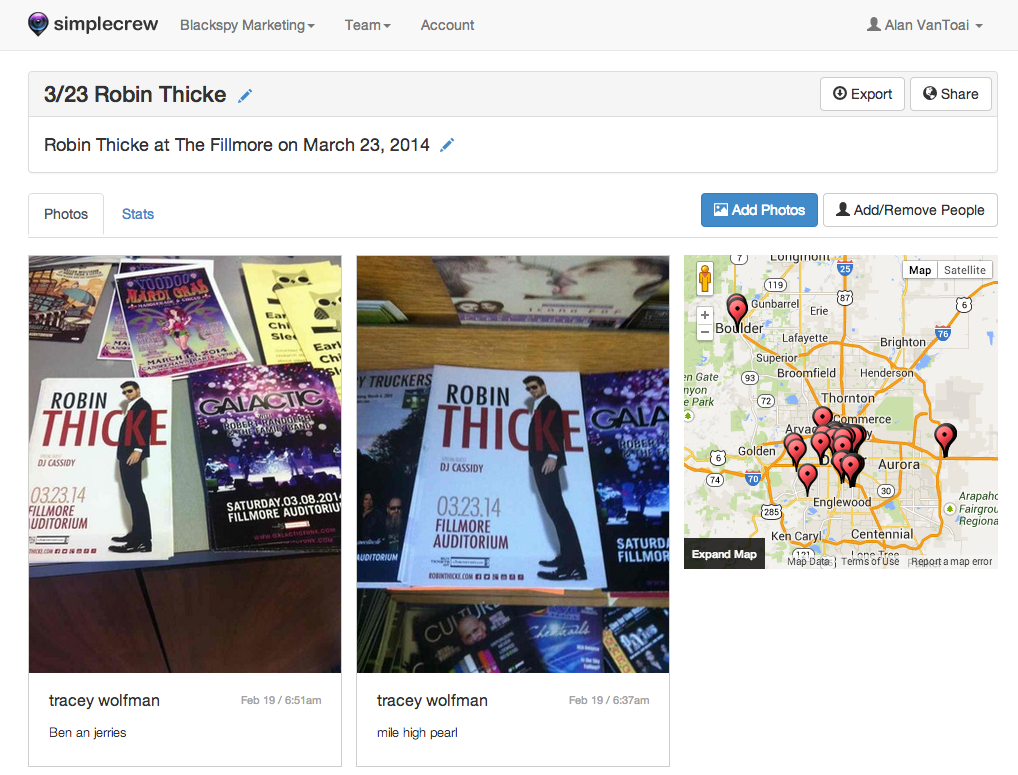 Expanded Map View
Click the “Expand Map” button in the bottom left corner of the map to view a larger map with thumbnails. 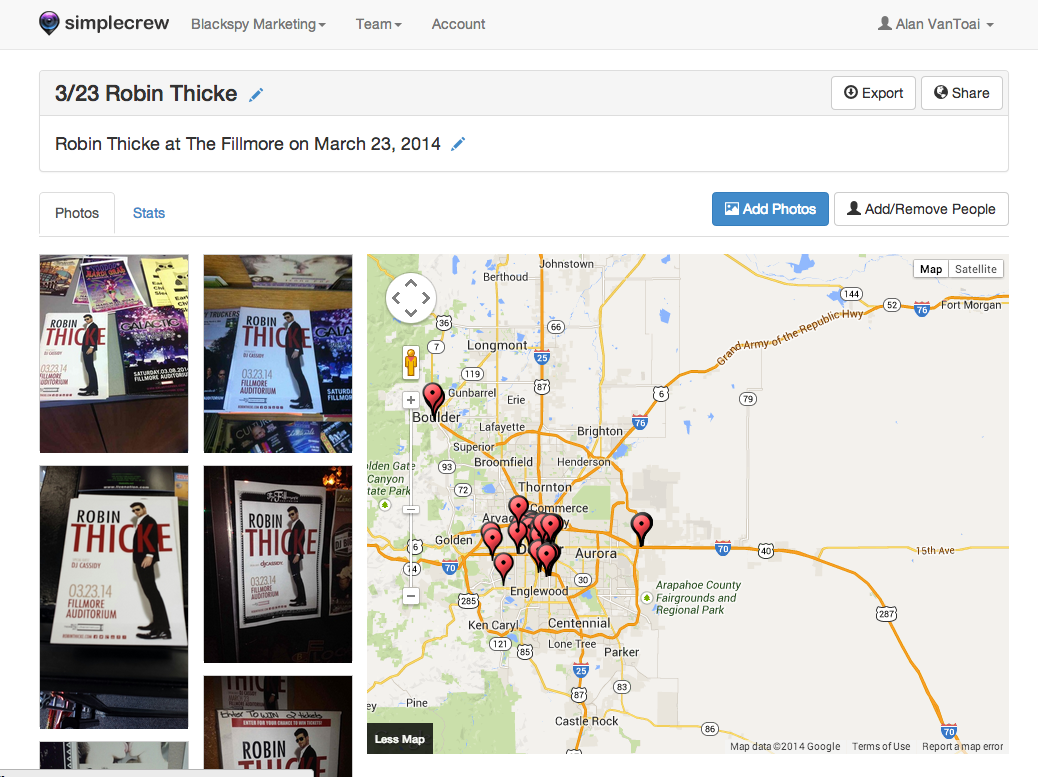 Campaign Stats
Click the “Stats” tab to see the updated campaign stats page. The number of photos and people assigned are front and center, along with a breakdown of how many photos each person has posted. 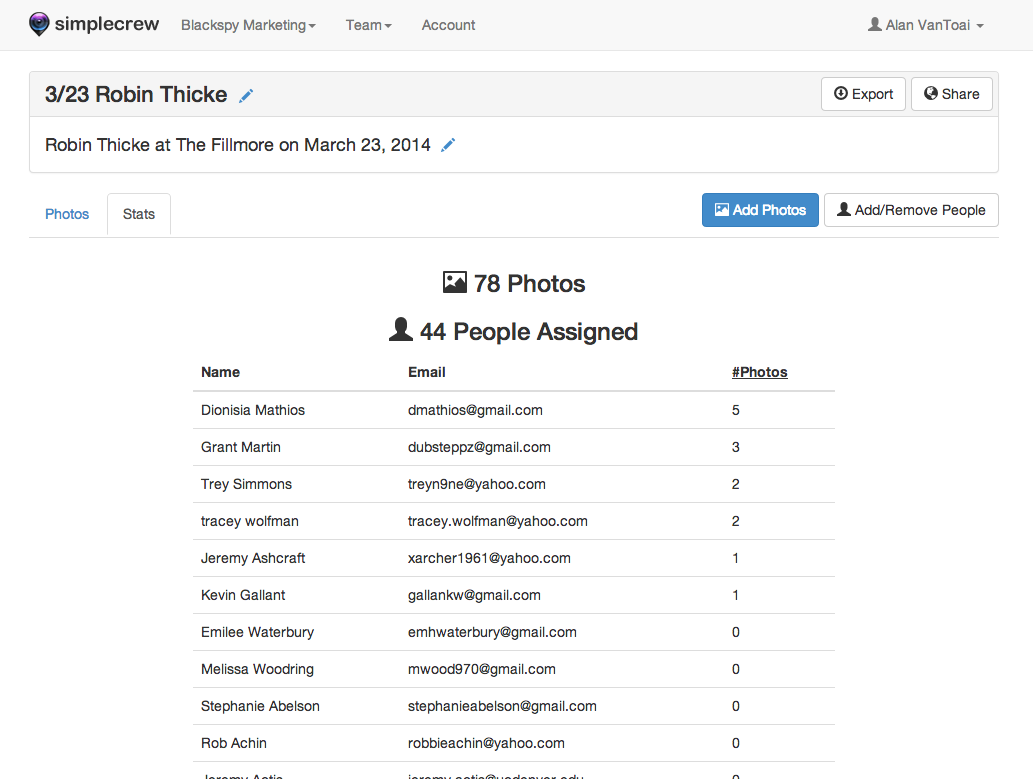 You can now include cover photos with your publicly shared campaigns, and they look awesome! 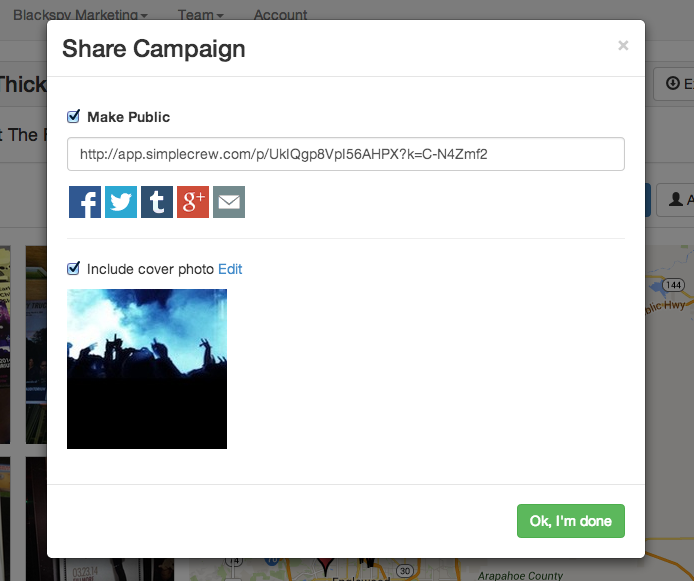 Edit Campaign Title and Description
Click on the pencils icons next to the campaign title and description to edit the campaign details. 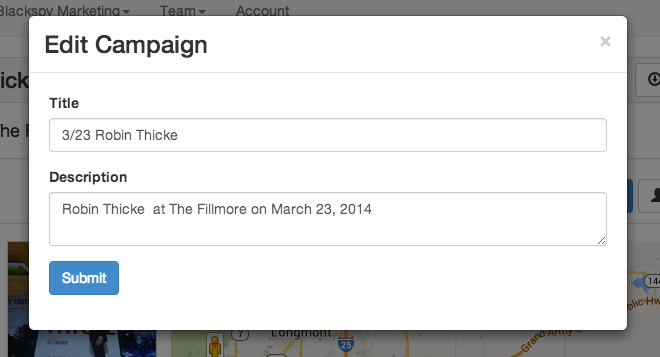 Photo Viewer
Click on any photo or map thumbnail to bring up the photo viewer. The updated photo viewer now includes a map that shows the location of where the photo was taken. Click the left and right buttons on your keyboard to flip through the photos. 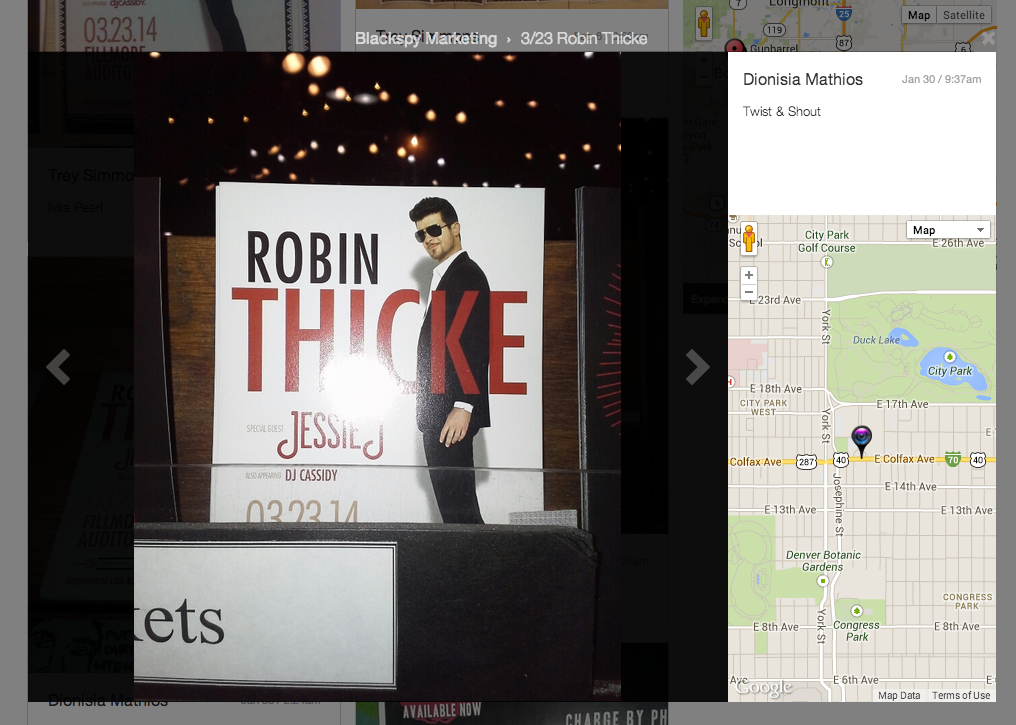 Works great on mobile
The updated design is now fully responsive – meaning it works great across mobile devices and iPads/tablets. You can even upload photos from your smartphone using the “Add Photos” button. 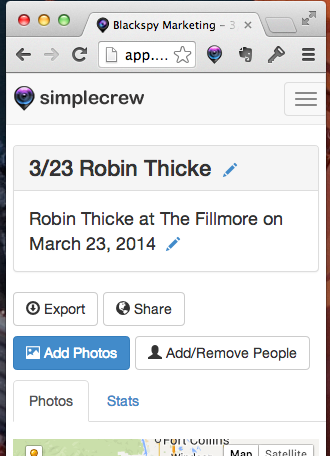 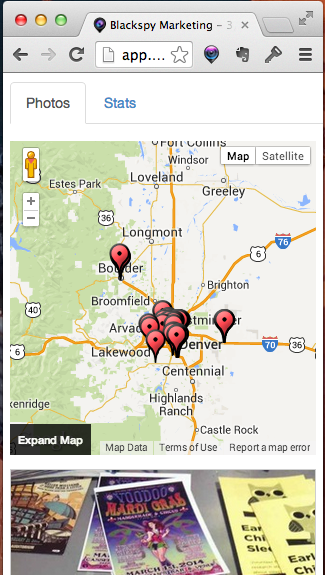 We hope you enjoy these new improvements, and thanks for using SimpleCrew 🙂

This week, Mike pushed out our new Public Share timeline design for all customers. Check out this example campaign from our friends at Blackspy Marketing. The new design features a sleek new look with a couple key points: 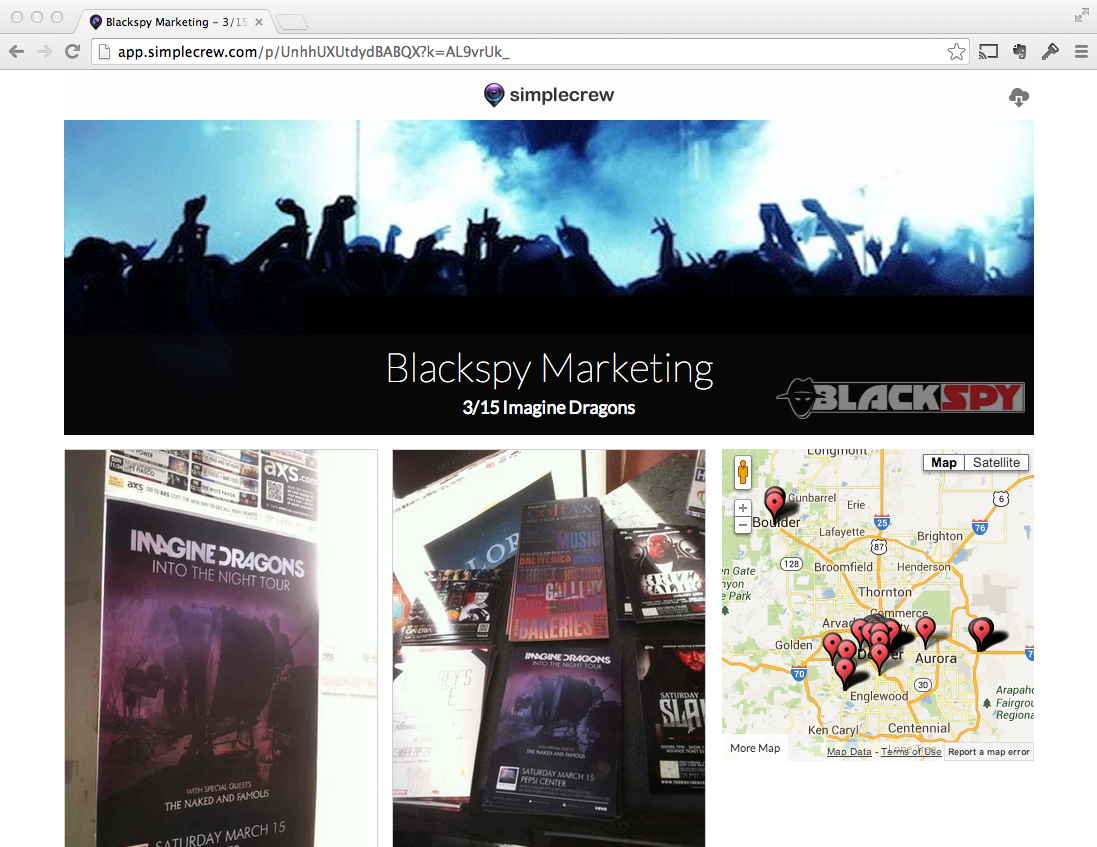 The update also features a redesigned pop-up photo modal that comes up when you click on any thumbnail: 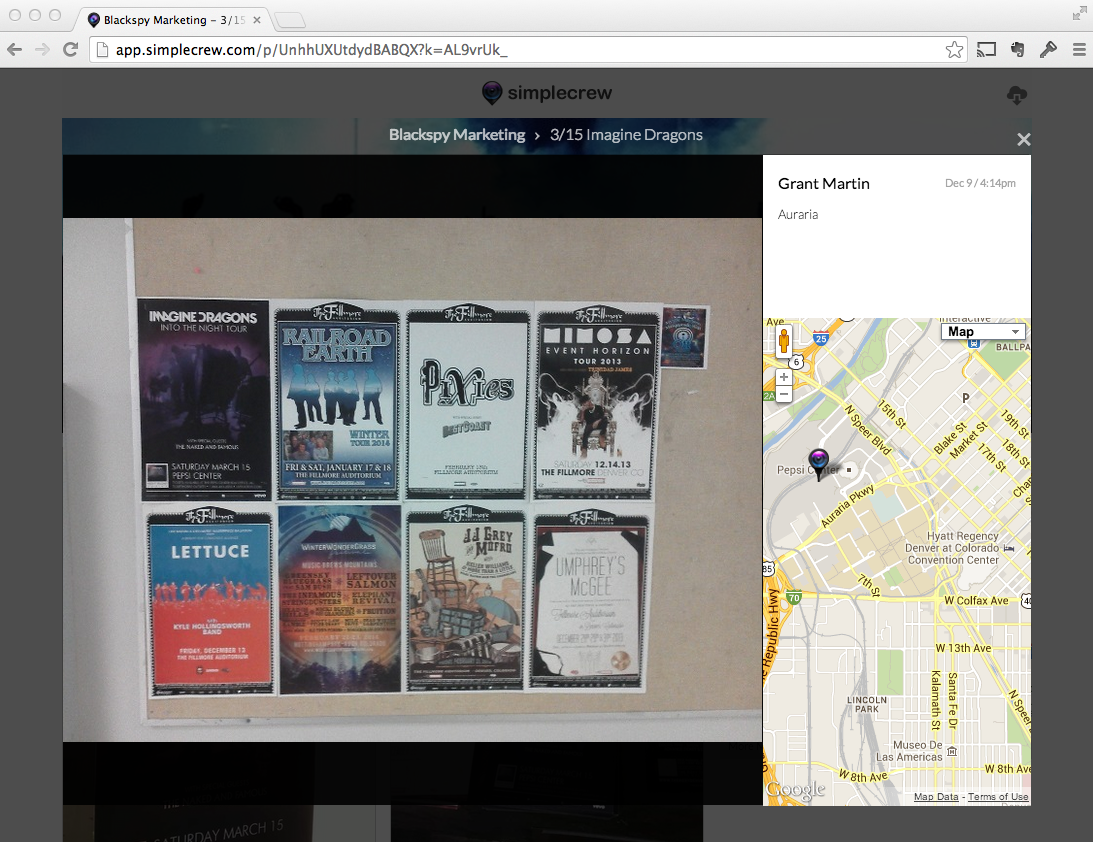 These changes will start to make their way into the redesign of the entire app that we’ll be releasing in increments over the next few weeks and months. Let us know what you think 🙂

Special thanks to designer Simon Goetz who did a fantastic job working with us to create the new design for the timeline and photo pop-up.